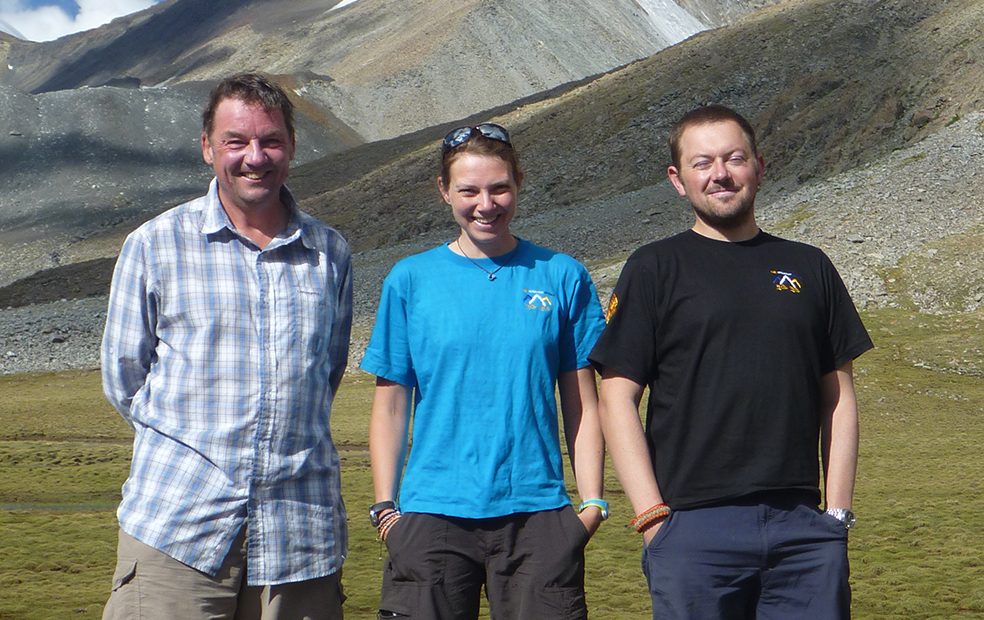 Congratulations to Matt Jones and his team

Matt Jones is playing the lead role of Truffaldino in our upcoming production of The Servant of Two Masters.  Some members of Kingsley Players have donated to Matt who is part of a British expedition led by Douglas Briton.

The team has made the first ascent of Cha Ri (6046m) in the Jammu and Kashmir Himalaya. The team of climbers includes Douglas Briton, Caroline McCann and Matthew Jones – they all summited on 24th August 2013 and all three are now back in Leh.

The team had been given official approval by the Indian Government to explore the unvisited mountain range, which they have christened Kang Yabat after the glacier at the head of the valley, and to attempt one of the peaks in that range.

After two years of planning the mountaineers set up base camp in the village of Gya, the ancient capital of the kingdom of Ladakh. From here the team began their exploration of the Yabat valley, assisted by a local horseman. It took five days to reach the foot of the glacier where they established advanced base camp. The camp was an oasis of safety amongst constant rockfalls and landslides from the surrounding peaks and glaciers.

The party undertook useful reconnaissance on the glacial approaches to the mountain which helped them to ascertain the safest and most efficient way to climb the lower reaches on their summit attempt. This certainly helped them achieve their goal and ascent was achieved in a single 13 hour push by Matt and Caroline. A weather window also contributed to their success; the mountain had good weather while the surrounding valleys were battered by storms. Two local staff, Wangtuk and Nimu, helped the pair lay caches of supplies on the lower reaches of the glacier for use in their descent.

The lower flanks of the mountain were quite loose scree and rock, but the upper reaches were solid red granite which Caroline and Matt very much enjoyed climbing.

The summit pyramid however, was very steep and loose. The final eight metres were too unstable to bear the weight of the team. The next day, the climbers’ decision not to ascend this final pile of rocks was validated when they saw a significant rockfall from the summit cone.

The successful ascent was complete when the climbers returned to advanced base camp just after nightfall, accompanied over the last 2km by their colleagues.

The name Cha Ri (meaning Mountain of the Flying Bird) was chosen after a Lammergeier was seen circling the mountain on most days. Ironically, Cha also means tea, which the team drank pints of during the course of their expedition! In the course of the climb, the duo also discovered an unrecorded glacial lake which they will map and report to the authorities.

“There is much scope for future exploration”, says Douglas, “and the Kang Yabat range holds many challenges for climbers of varying levels of technical expertise”.

Douglas Briton is a Research Student at the University of Edinburgh and lives in Linlithgow, West Lothian with his wife Hazel. Caroline McCann is a professional Outdoor Instructor living in Hadfield, Derbyshire. Matt Jones is a Data Analyst who lives in Northallerton, Yorkshire.