Be part of an exciting premiere of a new one act play, written and directed by Lynn Pegler

2019 marks the bicentenary of one of England’s great political events. A peaceful rally at St Petersfield, Manchester, on 16 August 1819 turned into a massacre after troops were ordered to attack a crowd of c. 60,000 men, women and children.

Some 17 people died and over 600 were injured.  This new play follows the fortunes of real and imaginary people caught up in this tumultuous event on our doorstep 200 years ago.

Lots of small and larger parts for adults and young people, all ages

Four men and four women able to play all roles if necessary.

Chairman of the Manchester Relief Committee – male, any age

Edward Gilmore: Catherine’s father. Magistrate and head of the Gilmore household. Owner of a farming estate and mill. 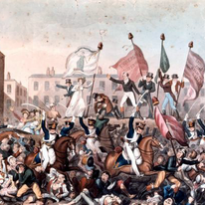