Kingsley Players have enjoyed major success in the 2022 Cheshire Theatre Guild awards at Chester Little Theatre, winning four categories against strong competition from across the county.

Peter Pan, directed by Jake Powell, staged in January, was awarded the James Tait Award for Best Production with Musical Content, and nine-year-old cast member Rachel Horton, was given the special Adjudicator’s Award for her performance as Tinkerbell.

Neil Silcock’s comedy acting talent was recognised by the Jane Keylock Award for Comedy for his role as Frank in the popular Alan Ayckbourn play How the Other Half Loves. Lesley Silcock, his wife in real life as well as on stage, also received a nomination for the same award for her portrayal of Frank’s wife, Fiona.

And Lynn Pegler received her second Write Now! Dave Murray Award for New Writing for the premiere of her new one act play about the famous children’s author Lewis Carroll and his relationship with the real Alice. Alice’s Quest for Wonderland featured performances by Lynn, James Partington, Simon Hetherington and Jo Oultram in a fast-moving drama in which they played more than 22 characters, including the White Rabbit and the Queen of Hearts. 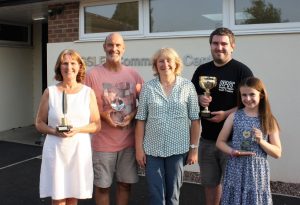 Kingsley Players chair Jo Oultram said: “I am delighted that our high standard of work has been recognised again by the Cheshire Theatre Guild. These awards reflect both the talent of our performers and that of our production team, who put so much effort into stage management, sound, lighting, costumes and running the theatre in Kingsley.”

Kingsley Players will next be on stage in October (26-29) with Harold Brighouse’s classic play Hobson’s Choice, directed by Lesley Silcock, and in January 2023 with a production of Julian Fellowes’ West End hit musical adaption of Wind in the Willows, directed by Lynn Pegler.