CASTING CALL: The person who was going to play Charlotte Lucas in the October production of “Pride & Prejudice” has unfortunately had to drop out. Happily though it is because she has been offered a place in Stratford Upon Avon...Read more

Kingsley Players have won a record 16 nominations for the 2018 Cheshire Theatre Guild awards, which will be presented in Macclesfield next month.  All four of the theatre group’s productions over the last year have received nominations in a variety...Read more

We are holding auditions for Pride and Prejudice on Sunday 20th May at 5.30pm at Kingsley Community Centre. If you’d like to audition for a part, or help out with the production, please come along and talk to Kelly White....Read more

Our NODA representative, Joe Clarke, attended our production of ‘Arabian Nights’ on Saturday evening and has sent his report. He was full of praise for the concept, direction, set, technical aspects, and the cast. Highlights of the report include: ‘Arabian...Read more

The Kingsley Players AGM will take place on Sunday 22nd April 2018 at 6.00pm in Kingsley Community Centre Lounge.  Below is the agenda and a nominations form.  I look forward to seeing you there. Kind regards, Colin Smith Chairman KP AGM Agenda...Read more

Auditions for May Play 17th Jan

Our May play will be ‘A Bunch of Amateurs’ by Ian Hislop and Nick Newman. Auditions will take place on 17th January, Kingsley Community Centre, 7.30pm. Malcolm Barker explains: I am back directing at Kingsley after a gap of three years...Read more

Summary of NODA adjudication for Cinderella

We have received the adjudication for Cinderella from NODA Northwest written by Louise Colohan.   Full of praise for “a witty, highly energised and very original production which was well received by all in attendance”, the author loved the music, all...Read more

We are delighted to announce that we have received 4 nominations from NODA for Cinderella, including Best Pantomime and best youths in an adult production for Chloe, Catrin and Matthew. A big “Well Done” to everybody who was involved with...Read more

We will be holding auditions for young people and adults on Sunday 10th September 2017 from 4pm (under 18’s) and 5pm (adults) at Kingsley Community Centre. There are parts for 8 mice and a cat, at least 6 parts for older...Read more 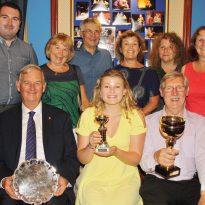 Kingsley Players had a tremendous time at the Cheshire Theatre Guild awards night last night – a fantastic achievement for everyone! We had six nominations and won three awards! 1. Best Musical – A Mouse’s Tale 2. Catrin Jones – Most Promising Youngster in...Read more